I’ve noticed in the past few months that there is a heightened awareness of issues relating to climate change and to the short term cost of oil. Of course indigenous northern latitude peoples are concerned about losing their way of life. Yet even conservative pundits such as Forbes Magazine seem to be taking our consumptive patterns seriously. The U.S. shows no leadership in continuing to reject Kyoto though the short term cost of compliance would be much less than the long term costs of environmental damage.

I do believe we are entering the tipping point, where we can no longer slow the change enough to save much of what we stand to lose. From odd diseases popping up damaging ecosystems, to complete changing of biomes, we have no idea where all the pitfall are. Okay, so say goodbye to southern Florida via rising ocean levels or hurricanes or both. It seems pretty stupid to continue to rebuild on sand bars ocean in the Gulf and Atlantic states.

Most aware folks seem rather cynical that we will do anything before the destruction is too wide-spread to stop. It does seem our own short term view and greed dooms us to something substantially less than what we have now. Demand for land and resources will lead to wars, and famine, which may lead to reduced population, the other equation in the issue of sustainability.

I saw a comic in Time magazine recently, showing Bush as the Fuel-Miser-in-Chief.

Oh well. It’s also one year since I started this blog. 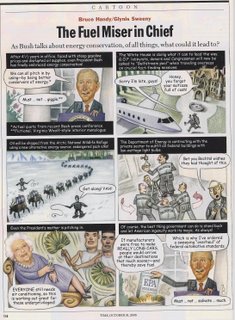