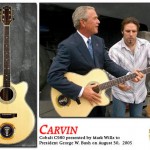 I’m so proud. A company I’ve been doing business with for PA equipment has provided a Presidential Seal guitar to George W. 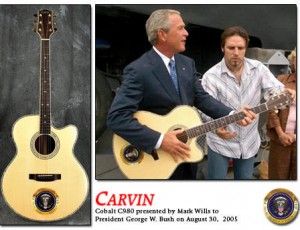 Now I have to admit to some discomfit, realizing that Carvin thinks they are enhancing their caché by promoting this special occasion. Giving a guitar to one who has caused the loss of tens of thousands of lives in Iraq – Iraqi, American, European, etc. and who doesn’t even play the guitar, as evidenced by how he is holding it, a G chord on the wrong fret and the panicky look on the fellow behind him who probably thinks he’s going to drop the guitar. I have to think that, with George W.’s goofy grin, his chord formation is more likely a result of him giving us all the finger. I would expect no less. On his way back, he had Air Force 1 fly over Lousiana and Mississippi coasts to view the Katrina damage. Johnny on the spot he is.